Mysore was the headquarters of the Wodeyar maharajas whose dynasty ran from 1399 to 1947 except for the latter part of the 18th century when the Muslims Haider Ali and his son Tipu Sultan were in power. Mysore is about a 2½-hour drive on a modern highway from Bangalore.

From the roof of our Mysore hotel we could see rising above the horizon a couple mosques and three notable landmarks: the Maharaja’s Palace (south), the Lalitha Mahal (east) and St Philomena’s Church (north). Mysore and Bangalore vied for state capital in 1956. While Bangalore triumphed, the maharaja was named the first governor.

For such an historic city the main sites were surprisingly modern. The old palace burned down in 1897. The replacement was finished in 1912 and is well worth a visit. It is lit up on Sunday nights and other special holidays. The Lalitha Mahal (Mahal is Hindi for palace – think Taj Mahal) was built in 1931 to house the maharaja’s foreign guests. St Philomena’s Church is built in the Gothic style with the maharaja laying the foundation stone in 1933. We didn’t go in the Lalitha Mahal, now an expensive hotel on the outskirts of town, but the other two sites were all the more impressive because they were modern. 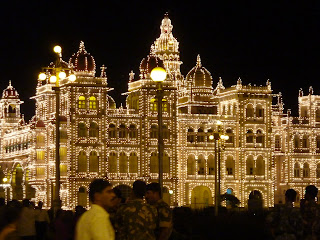 Our guidebook praised Mysore as a walkable city. If you know any blind people that want to visit India, Mysore is the place to go. In Bangalore and Delhi we have to constantly watch our step. There are holes, ditches, loose blocks of cement acting as sidewalks and, as the cuts on my palms and knee will attest, the occasional low-to-the ground pole to trip over as you try to cross the street. Mysore had some narrow streets without much in the way of sidewalks, but there were huge swaths of town with walkable sidewalks, or pavements, as they are called here.

Mysore seems to be part of the tourist circuit. In fact, our friend Greg saw some people he recognized from his side trip to Mangalore (which is not part of the tourist circuit). He and I also ran into a Spanish couple that we earlier met in Bangalore’s premier park, Lal Bagh. The wife can really carry off wearing a sari. I haven’t seen any other foreign woman able to do that.

Mysore is also a much smaller city than Bangalore. We kept running into Mysorean auto rickshaw drivers that we had seen before. There are some tourists who take a day trip from Bangalore to visit Mysore. Mysore (population: ~ 1 million) isn’t that small in my opinion. We spent 3 ½ days away from Bangalore, and we didn’t see everything there was to see. Fortunately, we were able to fulfill the Eric’s wish to climb Chamundi Hills south of Mysore where he got his picture taken in front of a statue of the demon that Mysore is named after. Chamundi is the goddess that defeated the demon Mahishasura. 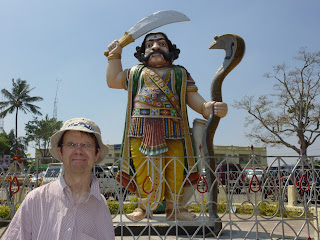 On the way to Mysore we also satisfied the girls’ main wish to take a boat ride and see crocodiles at a bird sanctuary on the Kaveri (Cauvery) River. The sanctuary is near Srirangapatna, which was our first stop on the way to Mysore. Srirangapatna is an island in the middle of the Kaveri River. Tipu Sultan was killed there when British troops with the help of some of Tipu’s traitorous commanders breached the fort. Tipu Sultan had been considered the biggest threat to English dominance in India. After he fell, the maharaja was “returned” to power.
Posted by Celeste at 3:13 AM