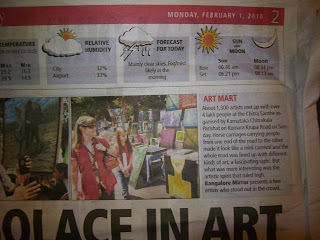 Today Sophia and I had our picture in the Bangalore Mirror. I couldn’t find the picture online, but I took my own photo of it. We were photographed at the Chitra Santhe, a once-a-year event in which painters line Kumara Krupa Road displaying and selling their art. We went to the event with Eric’s Indian grad school buddy and his family. From reading the paper every day I get the impression that newspaper photographers like to take photos of foreigners at Indian events. One of the clues that I’m a foreigner besides my skin and hair coloring is that I wear sunglasses. I do see some Indians wear sunglasses, but they stand out.

Because a couple of photographers took pictures of us at the fair, we suspected that we might be in the paper. I checked the papers at the dining hall this morning but didn’t see our picture. Sure enough though, the photo of the art fair in The Times of India had a foreigner perusing the art. Later I was walking through the complex gate returning from grocery shopping and the complex guards were quite pleased with themselves; they had found my photo in the Bangalore Mirror. I put the groceries away and went back out and bought 5 newspapers. Newspapers are cheap here. The 5 newspapers together cost me only 7½ rupees, about 17 US cents. The Times of India, a national newspaper, is twice as expensive.

The friend we went with told us that the fair is usually at the end of December, but because of a lunar eclipse on Dec 31, 2009, the fair was moved to the end of January.

At the fair Sophia had her portrait drawn. She is holding it in the photo. I bought a Madhubani painting and Eliza got a Warli painting.

Madhubani is a town in northern India in Bihar, one of India’s poorest states. The painting was traditionally done on mud walls, but now it is done on cloth and paper. A special nib – cotton wrapped around bamboo -- is used for applying the colors which are made from plants. The black outline is kohl, also used by women as eye makeup. A distinguishing feature of Madhubani paintings is that the entire canvas is filled with figures or designs. 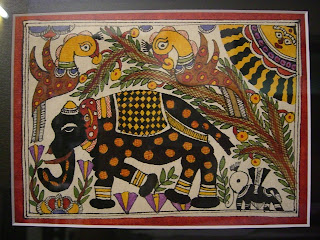 Everyone tells me that Warli paintings are from Maharashtra, the state in western India which contains Bombay (Mumbai), but some research indicates that the Warlis spill over into a couple of other states too. The Warlis are an ST (scheduled tribe). [Along with SCs (scheduled castes), STs are specifically recognized by the Indian constitution, and efforts are made to safeguard and improve their welfare.] Warli paintings are traditionally white rice paste painted on a reddish mud background though we were shown a brownish cow dung background also. The paintings depict daily life. The people and animals are primarily constructed from triangles and circles. A circular folk dance is a prominent feature of many paintings. Here you can see the dance and a bullock cart plowing the fields. 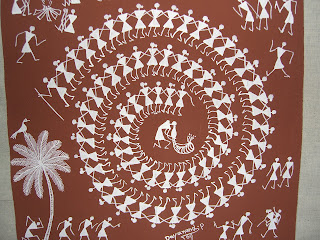 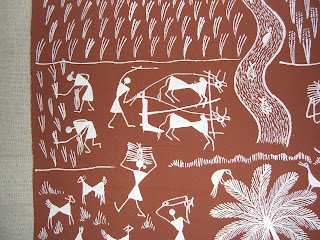 Ganesh was probably the most popular painters’ subject at the art fair. We already had a glass painting of Ganesh (below) made by the mother of a colleague of Eric so we didn’t feel that we needed to choose from among the many Ganesh options in order to fill a void. You can see a mouse in the painting below. A mouse is Ganesh’s vehicle. Every Hindu god or goddess has a vehicle. A vehicle is much more than just an animal or a means of transportation, but I’m certainly not the one to ask about the deeper symbolism. 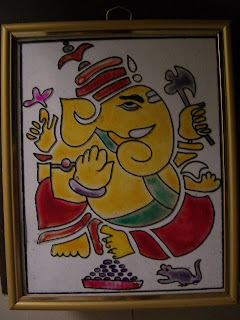