Holi – the festival of color

Holi is a festival where people pretty much just go around and drench others with water while smearing Holi “colors” on their clothing. The “colors” are just brightly colored powders that stick terribly to your clothing, hair and face. We celebrated Holi in our apartment complex by first having the typical Holi fight, then all having lunch served by caterers, and then finally having a bonfire this evening.

The first part lasted for a long time, almost 3 hours, and I actually left midway to take a shower, only to be dragged back. I had just thrown an entire water bucket at a boy whose water gun was outrageously large, the entire bucket and water, not just the water. He was angry and was expressing this by spraying me. I felt that it would be safer to retreat to our apartment and call it a day, Holi wise. Later when I was looking for Eliza, I was dragged in into the fight again, but managed to change back into my Holi clothes¹ before ruining a new pair. 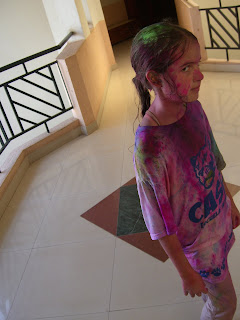 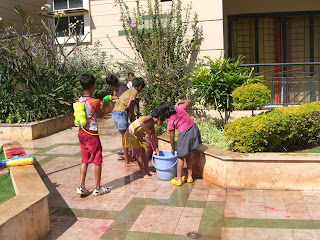 These pictures were taken at the beginning of the fight before we were totally covered with Holi colors.

The lunch was fun and followed by most of the female population² of the colony³ dancing. Everybody seems to know the choreography to about 6 dances and they taught us that, while we taught them the Macarena and the Bunny Hop.

The bonfire took place this evening, at around 7:00. Security had set it up very artistically; the logs were arranged almost perfectly symmetrically. We watched the logs burn for a while as people fed them newspaper, then burned incense, and threw popcorn and other stuff into it. Some people walked around the fire and held a cup of water and let it drip to the ground. Many times more than three people held onto the cup at the same time.

¹Everybody wore old clothes because the Holi colors do not come out easily. At the end, you couldn’t tell who you were spraying because everyone was covered in such a thick layer of color and everyone’s clothing was a kind of pinkish-purple color.
²Only girls and women seem to dance
³The word colony is sometimes used to describe your apartment complex.
Posted by Sophia at 7:46 AM