Fire in the TGIF Building 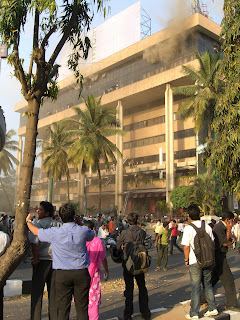 Yesterday afternoon as I was heading toward downtown on the bus, I witnessed a fire. Smoke was pouring out of the top floor of a 7-story building recognized by our family from the TGIF restaurant on the ground floor. The restaurant wasn’t responsible for the fire; instead electrical problems somewhere else started the fire.

Nine people died. Dozens more were hospitalized. As my bus went by the fire, a couple of ambulances were already there. A fire engine was just arriving. Traffic was slow. The fire engine came in our lane toward us and cut over to the other lane at the last minute. Bystanders helped move barricades so that the fire truck could make it through. There were hundreds, if not thousands, of spectators, some of them no doubt having just fled the burning building. 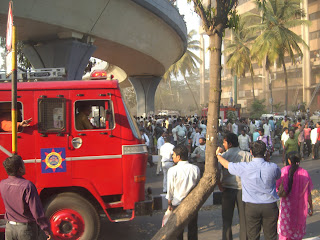 Reports say most of the deaths were due to people jumping out of the building to escape. The front page of The Deccan Herald newspaper showed large photos of two separate people as they jumped to their death. I personally found the photos a bit morbid.

This is the second big fire that I have witnessed in India. The first one was in Madurai in September when we visited that city. It occurred after working hours, and no one died in that fire.

There were several factors that contributed to the number of deaths and one lucky break that kept the fire from being worse. Witnesses said that their first indication that something was wrong was that the electricity went out (and didn’t come back on). The building had backup generators, but they must have been shut off when someone found out about the fire. No fire alarm sounded, and due to a water shutoff the sprinklers didn’t activate. The fire department had to bring water in from a distance to fight the fire. In addition, people didn’t know where the emergency exits (stairs) were and felt trapped.

The lucky break is that the diesel fuel for the generators didn’t catch on fire. That would have caused a massive explosion.

The building is on a major thoroughfare. The crisis led to a traffic jam lasting hours. My bus was probably in the last group of vehicles that made steady progress going by the building. My bridge partner was on a later bus, got stuck in the traffic and had to cancel our game. I was able to find another partner. My original partner finally showed up to bridge 1½ hours late.

The city has launched investigations to find the cause of the fire and to understand the lack of preparedness in handling the fire.
Posted by Celeste at 9:06 PM