One Bus Stop Away

I don’t feel like I know a place until I know my way around it. Being such a large city, Bangalore provides me with a big challenge. Most of the people that we socialize with don’t ride buses and are surprised that the bus is my main mode of transportation. I travel around the bus with a Bangalore city map and more detailed maps that I print out from Google Maps. Even when we are in a car or a tuk tuk, I want to follow along on a map.

I caused great amusement in one crowd when I described the location of some place as one bus stop away. Eric was there too, I was wearing an Indian outfit, and the whole situation earned me the moniker of Indian wife.

Tuk tuks are cheaper than taxis and more fun, but the drivers are notorious for not using their government-issued meters. Since even the Indians complain about being cheated, foreigners like me have no hope. Therefore, I mostly rely on buses. I’ve become quite the expert. Here is my how-to guide for riding buses in Bangalore.

1) It helps to know what your destination is and which bus you should be taking. Being such a high-tech city, Bangalore, of course, has a website that provides some route information, but I haven’t been successful with timings (i.e. schedules) even though timings are listed as an option. Don’t be surprised if the bus stop has one name on the website and a different one for common usage. Also buses don’t ply all the major streets. Some of the major streets are too narrow to service buses.

2) If there isn’t a bus shelter, then look for people congregating on the side of the street. They are probably waiting for a bus.

3) Women sit in the front of the bus, men in the back. People usually enter the door closest to their section. Be careful getting on and off buses. Drivers don’t always wait patiently so look for the handlebars for support in case the bus starts moving.

4) Usually a conductor will come by to collect your money. It helps to have small bills or coins. You pay based on the distance and the kind of bus. Air-conditioned buses are about twice as expensive as non-AC buses, but you are more likely to get a seat. The conductor should give you a receipt which you keep for the duration of the ride. If you are due change but don’t get it, look on the back of your receipt. If there is a handwritten mark, you have an IOU for the change, and the conductor will be back shortly with the change. Given how crowded the buses can be, I’m impressed that the conductors can keep all the passengers straight. Occasionally a bus driver is the lone bus employee, trying to collect and maneuver Bangalore traffic simultaneously. In that case, there is usually only one entrance and everyone pays before they sit down but not necessarily before the bus starts rolling.

5) On the bus if you don’t want to stand out in the crowd, then just sit quietly. You may talk to a friend next to you or on your cell phone or you can text, but reading on city buses is not an activity that people do. (I get a lot of reading done on buses. I figure I already stand out.) I have seen a garland maker working while riding on a bus. (See photos.) Neither do people eat on city buses though there doesn’t seem to be any injunction against eating. Sometimes a seated passenger is expected to help carry a schoolgirl’s backpack, no doubt to help relieve congestion in the aisle. 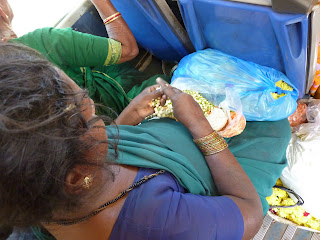 6) If you are getting off at an obscure stop or want to hop off the bus before the designated stop, stand by the door to signal your intentions. If the bus is crowded and a passenger wants to disembark at a designated stop from the back door, the conductor will often blow on a whistle to signal to the driver to stop.

7) When you actually disembark, LOOK LEFT. Indians, like the British, drive on the left side of the road, and two wheelers (i.e. motorcycles) like to squeeze between buses and sidewalks. If the coast is clear, then look straight ahead. Sometimes there are cement ditches between the bus and the sidewalk or service road.

8) If you are changing buses, don’t assume that the next bus you want comes to the exact same bus stop. Think of it more like a subway station, where you are changing from the orange line to the blue line. The station is the same, but you have to travel to get from one line to another.

Being a bus rider, I often consider the location of an establishment before patronizing it. For instance, I have settled on shopping at a grocery store about a 20-minute walk away along a busy street. After I get my groceries, I don’t walk to lug them home. There is no intersection nearby to safely cross the street, but, fortunately, the bus stop I want is on the same side of the street as the store. When I get off the bus, there is a traffic light for safe crossing. A movie theater on the other side of the street provides a different example. We only go to movies during the day because night presents us with two dangerous propositions: 1) not being able to see where we are walking and 2) crossing a busy street without a traffic light to get to a bus stop.

Since taxis are not always available when you want them and tuk tuks will sometimes refuse to go to your destination – what is up with that? – I recommend that Bangalore visitors be open to trying out the bus system. 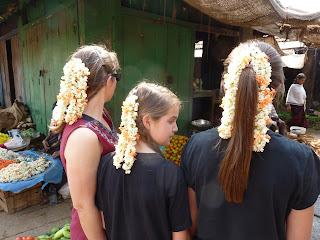