Hindi and English are the two official languages of India. You might think that English would be as common in India as it is in the US, and it is certainly common on signs, in stores, etc. However, many Indians on the street and in the buses do not speak English very well…. Meanwhile, my daughters would tell you that they know a fair number of Indians at their school who do not speak Hindi very well.

Even people who do speak English speak it in a particularly Indian way. For instance, today I bought a little savory pastry and the clerk asked me, “Parcel or having?” (American translation: For here or to go?)

Every morning over breakfast I read the newspaper. In the US, words printed in a different language are often italicized. In the Times of India newspaper here, an entire phrase in Hindi, titles of movies and, notably, the word “allegedly” are printed in italics. Other words are just printed as though they are standard English. Below is a list of some of the words that appear regularly in the newspaper along with what I think the words mean more or less, maybe less.

The Indians seem much more comfortable with language ambiguity than Americans. There are many people in Bangalore who didn’t grow up in this region and therefore don’t speak Kannada. They often don’t completely understand other Indians, but it doesn’t seem to faze them much.

In September Eric and I were watching English news on Indian television. Suddenly the reporter cut to an interview with the Minister for Human Resource Development. The minister proceeded to speak rapidly in Hindi but threw in a few English words like post-doctorate and research. I don't remember the exact words and didn’t record them. Eric and I just stood there with our mouths open.

Urdu is the national language of Pakistan. Urdu and Hindi are mutually intelligible in conversation, but the alphabets are entirely different. Eric told me that because of increasing Indo-Pak (Indian-Pakistani) tension there is a concerted effort to stop using Hindi words that came from Persian and Arabic. If a word is not pure Hindi, i.e. derived from Sanskrit or another Indian subcontinent language, one solution is to substitute an English word for the impure word.

Recently there has been a big uproar in Mumbai (Bombay) about language. In January the state’s chief minister suggested that all new cab drivers should be fluent in Marathi, the local language, but has since retracted that suggestion. The local Shiv Sena and Maharashtra Navnirman Sena (MNS) parties are based at least partly on a “Mumbai for Mumbai manoos” brand of politics. Recently the Indian National Congress Party General Secretary Rahul Gandhi (son of Rajiv and Sonia, grandson of Indira, and great-grandson of Jawaharlal Nehru) responded by saying that Mumbai belongs to all Indians. The big Bollywood star Shah Rukh Khan has voiced similar opinions. Mumbai is not only the largest city in India; it is also the film and financial capital.

Shah Rukh Khan leads me to another feature of English in India – abbreviations. Many people refer to Shah Rukh Khan as SRK. Almost every town has a Mahatma Gandhi Road, better known as MG Road. I was on CMH Road, and my host didn’t even know that CMH stood for Chinmaya Mission Hospital. Banashankari neighborhood is known as BSK, etc., etc., etc. Many Indian names are so long that people go by initials and last names. The full names are not even printed in newspapers. My first bridge partner here is known as RV.

Another language difficulty is that many names have officially changed, but habits die hard. Many city names have changed, e.g. Bangalore to Bengaluru, but the English name is still used at least in English conversations. Another example: To go to the central Kempegowda Bus Station, ask for Majestic. More frustrating is that street names have also changed. I haven’t found street signs to be standard fare here so I’ve learned to read the addresses listed at the bottom of store front signs. (See photo.) 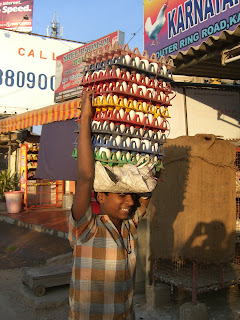 The moral – Come to India to experience English like you never have before. Warning: You might want to give yourself several weeks to learn the little language tricks.
Posted by Celeste at 5:49 AM