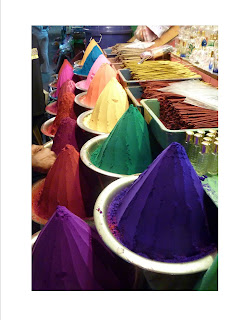 One of the things that I noticed about Holi was how different groups of people used the colours and water in different ways. The small children and at the beginning the larger children mostly just squirted each other with water guns. Some of these were exactly like a water gun that you would see in the US, but some were rather like two foot long syringes. Large plastic buckets provided filling stations. When filling your gun at the same time as someone else, it was necessary to fill it as quickly as possible, since the first person to finish invariably squirted the last.

At the beginning the larger children (that includes me) also used water guns, but we soon fell back on other methods. We filled buckets full of water and mixed liberal amounts of colour in. We weren’t particularly exclusive and sometimes the water would end up a muddy brown. After deciding whom to target, we snuck up behind them and dumped it on their head. At least that was the idea. Once while we were creeping up behind an uncle, another uncle behind us upended the bucket on us causing general hilarity.

The uncles smeared the colours all over each other until it looked like they were wearing masks. It got so that you almost couldn’t tell them apart. They also manned the hoses. Sometime during the celebration someone had wisely brought a few hoses out and they helped in the efficiency of the fun. Whenever somebody wanted a bucket filled, the uncles obliged.

The aunties all held plastic bags full of colour. They anointed everyone while wishing them “Happy Holi!” Later on once the smaller children had tired, the aunties sat and watched them. This immobility made them prime targets for the older children’s buckets. However, anyone actually holding a baby was off-limits. One time my mom saw my friends and me zeroing in with the bucket. She quickly grabbed baby Purna from her friend Kiran and we had to retreat amidst general cries of “No fair!”
Posted by Eliza at 5:03 PM