Life in the Complex: from Recycling to Swimming Pools

For years back in Colorado our family had trash and recycling. Last year we acquired compost. After that I felt like I could never go back. I realized how much I had been wasting before. The apartment complex we now live in has neither recycling nor compost, although my dad thinks that the trash is sorted once it's outside the building. It’s really hard for me to throw away a banana peel or a cardboard box. Our school here has recycling and so do some other public places, but for the most part recycling is not yet a common phenomenon. I have yet to see a compost bin. I haven’t even seen that many in the US. 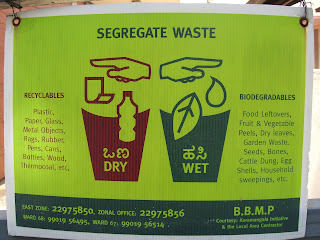 Our apartment complex is fairly new, and when it was built many young couples moved into it. Therefore, there is now a tremendous number of little kids. Out of the kids my sister and I have seen, only about ten are in fifth grade through tenth grade. I’d say we’ve seen about twenty kids aged four through ten and about fifteen infants. Mind you, these are only the ones we’ve seen. There is a smallish sort of sand box in the courtyard with various different kinds of playground equipment, and I’ve never seen it empty between 9 am and 8 pm. The little kids look up to me in awe, but they absolutely worship the ground Sophia walks on. Almost every night, there will be either be a phone call or a knock on the door asking Sophia if she wants to come play. Usually she will say yes, unless she has some more homework to do, etc. We have played many games, but the more common include football (soccer), freeze tag, and spud.

I’ve noticed a few differences about life in an apartment complex as opposed to a house. For one, you only have to walk downstairs to get involved in a conversation or a game of football. There is more neighborliness. When my mom wanted to borrow a rolling pin to make roti, she simply waltzed on over to her friend’s apartment. A few weeks later, that same friend taught her how to make saag paneer. As well, usually when I introduce myself to another kid, I mention my name and grade/age. Here you introduce yourself with your name, grade/age, and apartment number. For example, “Hi, I’m Eliza. I’m 13 and I live in X123.”

In our courtyard there is a lovely swimming pool surrounded by thick and quite beautiful foliage. My sister and I have taken a dip in it many balmy weekends. Here in Bangalore we are 13 degrees away from the equator so even in January it can get up to 85°F in the middle of the day. On one side of the pool there is a coconut tree, although my friend informed me that no one eats the coconuts; partly because no one owns a knife large enough to cut one of them up and partly because no one wants to climb up to get them down. I guess that coconuts don’t just fall off the tree like in stories or maybe our tree is just different. 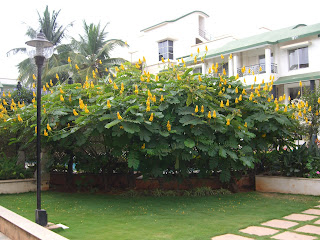 Some of the foliage surrounding the swimming pool. Overhead, on the opposite side of the pool, you can see the coconut tree.
Posted by Eliza at 7:04 AM