Non-vegetarian restaurants in Bangalore often offer chicken, mutton and fish. Beef and pork are much harder to find. If that is a problem, we have a solution. Go to Puducherry (aka Pondicherry). There is a convenient overnight train leaving Friday nights. Spend Saturday eating in Puducherry and hop back on the return train on Saturday evening. The 3-tier AC sleeper train is known as Garib Rath (poor man’s chariot) so the tickets are affordable. You rent bedding for 25 rupees (~55 cents) and sleep the trip away.

There is plenty to do in between meals. Pondi is a former French colony so check out the French flavor of the city. 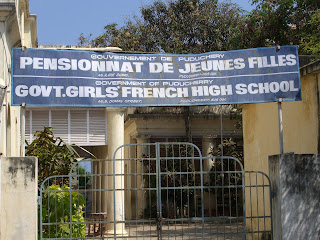 If you want more than beef and pork, try the croissants, crepes and coq au vin available in numerous restaurants. 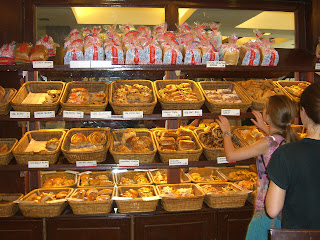 Admire the police in their képis hats. 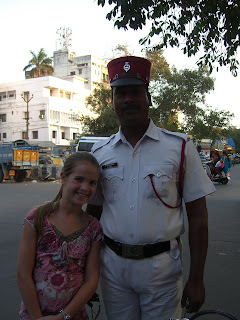 Dip your feet in the Bay of Bengal. 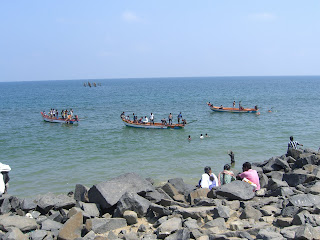 There is also a famous ashram that seems to be the main item on most visitors’ to-do list, but we didn’t feel the need to do more than go by it.

If you crave bicycling, this is also your town. There are only 200,000 people in Pondi and the streets in the French quarter are relatively quiet. I think cycling in Bangalore is a dangerous mode of transportation, but not in Pondi’s French quarter, though we didn’t see much advantage to bicycling since the area is fairly small.

Puducherry, like Delhi (and similar to Washington, D.C), is a Union Territory of India rather than a state. It actually consists of 4 separate regions “in” 3 different Indian states. We went to the largest region, also called Puducherry contained within the state of Tamil Nadu. The girls made sure to alight from the train at a stop before Puducherry and touch the dirt so they could say they had been to Tamil Nadu. Puducherry (all 4 pieces) became part of India after India became independent. The smallest region, Mahe, is located on the west coast surrounded by the state of Kerala, and I was amused to learn that there is an overnight Garib Rath train that travels from Mangalore in Karnataka (the state we live in) through Mahe all the way across southern India to Puducherry.

At first we were disappointed that our only option for taking a direct train to Pondi was to spend just over 12 hours there, but everything worked out very well. We all enjoyed the sleeper train. Sophia who doesn’t usually take well to transport motion of any kind actually looked forward to the return trip. A plus for Eric was going to Pondi before the heat in March. And, as you can tell from the girls’ blog entries, they were delighted to get back in time to celebrate Holi with friends in our apartment complex.
Posted by Celeste at 5:48 PM