During our first week in Bangalore we bought a great many different things to stock our kitchen, including various spices. We were advised to buy the brand MTR. Later European tourists as well as one of dad’s colleagues recommended the restaurant called MTR or Mavalli Tiffin Room. He said that you couldn’t come to Bangalore without eating there. Last Saturday we had an opportunity to go. 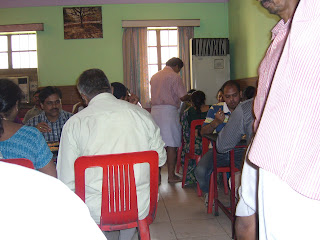 Comprised of about four undecorated rooms, MTR has an atmosphere of efficiency and assembly lines. There was no waiter smoothing gliding over with glasses of wine to ask you what you would like to eat. There was no soft clink of polished cutlery blending with the equally soft voices of the clientele. Instead everybody in the room was given a glass of water, (similar to many Indian restaurants, you could request cold or room-temperature water) an aluminum spoon, and an aluminum tray with about seven little compartments. Lungi-clad men (lungi – an informal tube-like piece of cloth worn around the waist) toting slop buckets sloshed the food unceremoniously onto your plate. Everybody got the same food, but what food! A dozen toothsome things soon covered our plates and as Dad put it, “Everything tastes different; it’s not all sort of muddy.” 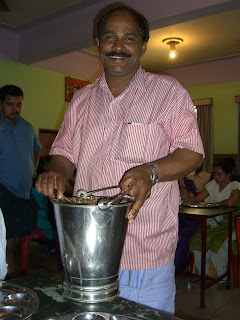 MTR is not only known for its food, but for its no-nonsense attitude. We heard horror stories about people getting there a few minutes late and finding their reservation given to someone else. The waiters gave you the food even when you shook your head. It reminded me of school cafeteria workers. One thing that did work was saying “selpa, selpa” (Kannada for “a little”) upon which you received a smaller ration. 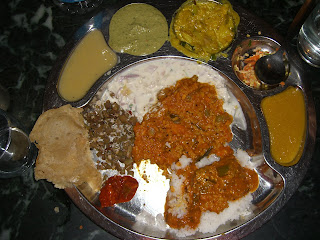