India’s national parliament planned to mark the 100th anniversary of International Women’s Day by passing a law requiring that 33% of the members of parliament (MP) and the state assemblies be women. Some male MPs conceded that they would be voting against their self-interest; they could vote themselves out of a job after the next election. Coalitions were announced last week. Today pandemonium ensued. The coalitions fell apart. The parliament will try again tomorrow. Sonia Gandhi is a big supporter of this proposed law. Her husband pushed it when he was alive.

Most (all?) elected officials in India need not reside in the district which they represent. In Bangalore our wards already have quotas for women as well as for scheduled castes and scheduled tribes. Some districts are designated for women, others for SC/ST, yet others for women who are a member of an SC or ST. (The greater Bangalore municipal election, 4 long years in the waiting, was recently rescheduled from Feb 21 to March 28.)

India’s population is about 70% rural, but the iconic image of a rural woman balancing a heavy load on her head is not uncommon in Bangalore either. The women wear colorful saris as they work in construction or carry a load of wood home for cooking. 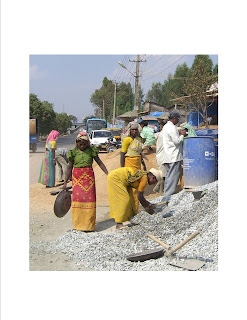 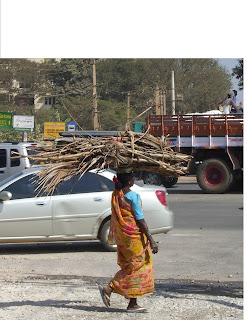 A female doctor friend of mine wears a sari to her office every day. I’ve never seen her wear a sari though. She prefers to wear a salwar kameez when she is not working. If she were to wear a salwar kameez to work though, people would think she was an intern or an assistant instead of the doctor. (See Blackouts for a photo of a salwar kameez.) Another woman who eats breakfast in the dining hall with us wears jeans every day at breakfast and then changes into Indian clothes for going to the office. Eric’s female engineering colleagues don’t seem to have to follow the wear-a-sari rule, but they often wear a dupatta (long scarf). I personally find wearing a dupatta a hassle. I also fear for all the women wearing saris and dupattas while riding motorcycles. Some motorcycles marketed to women have a special sari guard.

Most marriages in India are arranged and work out fine, but honor killings and dowry deaths are far too frequent. The story often told to cover up for a bride burning is that there was an explosion in the kitchen while the woman was cooking.*

I hadn’t seen any (noticeably) pregnant women in India for the first two months in India. Then I saw two in the space of five seconds. It turned out I was in front of a maternity hospital. When I asked some Indians why there were no pregnant women, they said that from the 6th month of pregnancy on women will often stay at home and not go out.

There is a saying in India, “We Two. Ours One.” (See photo.) It means “We two – mom and dad – with our one child.” It used to be “We Two. Ours Two,” but I guess India is trying harder to reduce the population growth. Among the families that we know, having one or two children is common. Siblings tend to be spaced several years apart. There is also a disparity between the number of boys and girls born in India though I haven’t noticed it. Ultrasounds for gender identification, although illegal, are reputed to be popular here, followed by abortions if the results are not satisfactory. 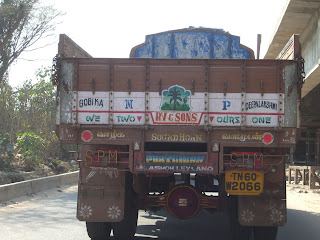 “Housewife” seems to be a common profession here. Along with not working outside the home, some women don’t do much (house)work inside the home much either. Many hire a cook and a housecleaner. There are some daycare centers for working parents, but the preference seems to be having a female relative watch the children.

I’m playing housewife here too, but I feel more like a tourist. I’m exploring Bangalore and playing bridge and not really living the typical life of a Bangalore woman. People are amazed that I go out by myself to explore the city. Sometimes it is nice to be a foreigner and “break the gender rules.”

*Depressing footnote – Most children’s accidents are poisonings involving kerosene. The kerosene is used for lamps. It is clear and children mistake it for water. Poisoning is also common among farmers committing suicide; the bills come due, the harvest hasn’t cooperated and lethal fertilizers are nearby. Students commit suicide because they don’t do well on their exams.
Posted by Celeste at 5:06 PM