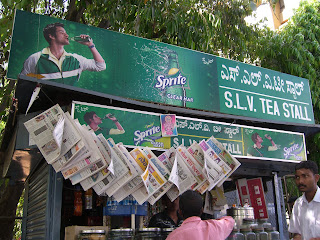 Tuesday was Ugadi, the Hindu New Year. Schools were closed, but there weren’t any big public celebrations unless you count the cricket game. Families mostly celebrate the holiday at home with special food.

I thought everything would be back to normal on Wednesday so I was quite surprised when I went to read the newspaper and heard that there weren’t any and none were going to be showing up. It turns out that the presses don’t print newspapers the day after Ugadi. The newspaper workers get a day off for Ugadi. I was told that there are two other holidays which are also press holidays: Diwali and Ganesh’s birthday.

In the US I often hear about the demise of newspapers. Imagine the rumors if there were a press holiday!
Posted by Celeste at 5:48 AM