Tibetans Are Welcome in Karnataka

On the way to the Coorg rainforest we stopped to visit the first ever Tibetan exile settlement at Bylakuppe. Karnatakans tell me that Bylakuppe is the largest Tibetan refugee settlement in the world. Dharamshala, the seat of the exiled Tibetan government in north India, is more famous, but the Namdroling Monastery in Bylakuppe is well worth a visit if you are in the area.

The monastery is best known for the Golden Temple. (See photo.) 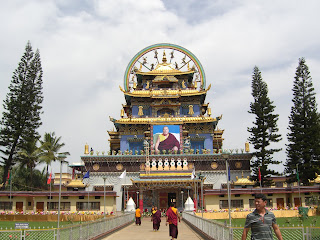 I was impressed by the beautiful buildings constructed in the last 50 years and by the Tibetans monks going about their daily routines. As the picture of the monks fetching water indicates, there is a large, active community here. 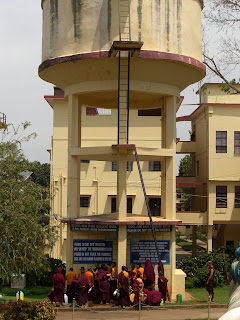 I visited Tibet in 1988. There was palpable tension between the Tibetans and the Chinese. I did not get any similar feeling during my short visit to Bylakuppe. In fact, the Dalai Lama claims a special personal relationship with his adopted country of India, the birthplace of Buddhism.

P.S. Sophia said to make sure to tell you that if you visit the Golden Temple, you should eat at Shanthi’s Family Restaurant.
Posted by Celeste at 5:41 PM