I can’t speak for the rest of India, but to my foreign eyes, it sure seems like Bangalore is full of religious fervor. Just yesterday midmorning in our courtyard I met a group of young girls all dressed in festival finery heading off to do puja (worship) at various aunty and uncle’s homes where they would collect presents afterwards. My girls didn’t have the day off from school so I don’t think it was a major holiday. (Meanwhile my girls tell me that a lot of people aren’t going to school these days because they are worried about exams; they can get more studying done at home than at school.)

Hinduism is a very diverse religion with tolerance for different ideas. Generally speaking there are three primary gods: Brahma (the creator), Vishnu (the preserver) and Shiva (the destroyer of evil). In practice, most families are either Vishnu or Shiva adherents. There are only a couple of Brahma temples in India. In addition to the three main gods and their avatars (or alternate identities – e.g.mother, daughter, wife, teacher, patient and customer may all describe the same person), each god has a family. For example, Ganesha (the elephant god) is the son of Shiva and Parvati.

Most families have a small shrine in their homes where they do puja. A foreign company planning to build apartment complexes in India was told they needed to redo their architectural drawings to include a space in each apartment for the shrine. In our family we also have a collection of dolls – oops, I mean iDolls. Oops again – “idols” is the proper term used in India. We have a portrait of Ganesha (as seen in Chitra Santhe), a Nataraja (dancing Shiva), a Balaji (avatar of Vishnu – see #3 below), a Saraswati (wife of Brahma and goddess of learning), a small portrait of Sri Sri Ravi Shankar and a placard with the philosophy of Sathya Sai Baba.

Darshan is a common word in India. It means the beholding of a deity (usually an idol), a revered person or a sacred object. Because the viewing is considered to be reciprocal, the human receives a blessing. Here are some of the touted religious sites to see in and around Bangalore if you want to perform darshan.

1) Shiva Mandir. Mandir means temple. Below is a photo of its immense Shiva statue. Eric compares this temple to Disneyland. It has a frolicky, commercially-magic sort of atmosphere rather than a serious, holy atmosphere. 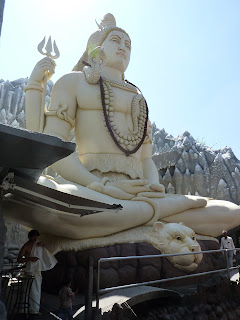 2) ISKCON Temple. ISKCON stands for International Society for Krishna Consciousness, better known as the Hare Krishnas. The ISKCON followers believe that Krishna is the prime god. (Other Hindus believe that Krishna and Buddha [!!!] are avatars of Vishnu.) ISKCON’s Indian founder was told by his guru to go to the US because the US was the cultural mover and shaker; if the US would adopt the beliefs, the whole world would soon follow. A FOLK (Friend of Lord Krishna) proudly told me that the ISKCON temple in Bangalore was second in south Asia in visitors and collection of funds after the Venkateswara Temple in Tirupathi. I’m not very surprised. After a short visit to the main hall at ISKCON, you have to wind your way through about ½ kilometer of vendors selling wares and temple workers asking for donations. There is also a display of the new, grander temple that ISKCON plans to build although the current temple already seems quite adequate if not over the top. At the end whether you have given money or not, you are invited to partake of prasadam, a savory porridge served from a huge vat, because the founder believed that no one within ten miles of an ISKCON temple should go hungry. The standard salutation at the temple is “Hare Krishna.”

3) Tirumala Venkateswara Temple (aka Tirupathi). This temple is 250 km from Bangalore in Andhra Pradesh. The temple is also called Balaji Temple. This is the most popular pilgrimage site in the world. It is more popular than Mecca, more popular than the Vatican. Sleeper cars on trains are booked weeks in advance. It gets 40,000 visitors a day on average. It has 12,000 priests. We didn’t actually make it to Tirupathi, but we did go to Chikkatirupathi (small Tirupathi) in Karnataka. We visited a government school, not the town’s main temple even though it was across the street from the school.

4) Sathya Sai Baba’s summer ashram. Sathya Sai Baba is a godman who claims to be the reincarnation of the famous Sai Baba of Shirdi and preaches that there is one God which is present in all religions. His 6 million followers are not expected to give up their personal religion. (See photo below of the emblem over the ashram gate.) His most common miracle is the materialization of ash from thin air. I was given some ash during my visit to the ashram. The godman hadn’t arrived at his summer ashram yet so the place was fairly quiet. Sai Baba is now 83 years old and in a wheelchair. I get the impression that his popularity has peaked, but he has done some wonderful community service work including providing free health care at his hospital near the ashram. The standard salutation at the ashram is “Sai Ram.”

5) Art of Living Foundation headquarters. Sri Sri Ravi Shankar, a Bangalore native, is the founder of this United Nations-accredited humanitarian organization with centers in 140 countries. Sri Sri was recently named one of the 25 most powerful people in Bangalore. He encourages healthy and spiritual living through yoga and meditation. Like Sai Baba, he doesn’t demand that his organization’s workers and volunteers belong to a particular religion. Sri Sri has also focused on disaster relief and conflict resolution especially in the Indian subcontinent region.

For a different taste of religion, you could follow godman Swami Nithyananda’s travails. A sex scandal developed recently when a videotape of him with a Tamil actress was made public. Charges against him were filed in Bangalore. He has an ashram in Kerala, a neighboring state, and also one 40 km outside of Bangalore, but I never heard of him until the scandal broke.

If you tend towards Christianity, there are several Christian churches in downtown Bangalore, many built by the British. Winston Churchill used to attend Trinity Church which was the military church.

If your religious tendencies veer in other directions, here are some other local opportunities for darshan.
1) lions, tigers, bears, elephants, deer and butterflies – Bannerghatta National Park
2) science – Hindustan Aeronautics Limited (HAL) Heritage Museum (zoom in on the photo below) and the Vishveshwarya Industry and Technological (VIT) Museum (good for kids)

I recommend darshan, no matter what your preferences are.
Posted by Celeste at 4:25 AM