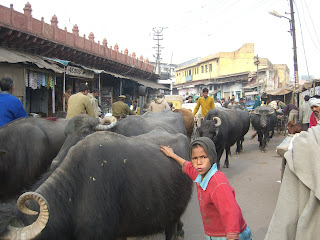 The variety of animals just wandering around on the street is really quite amazing. Everyone has heard about there being cows on the street in India – it’s practically a cliché by now. It’s true that cows are often seen, but in the two weeks that we’ve been here, we’ve also seen the following animals:

-water buffaloes
-horses pulling carts
-stray dogs (more on this later)
-monkeys (especially around the Taj Mahal (see “Where is Eliza?”))
-a herd of goats being driven by a small boy and also several lone goats trotting the side of the road or tied up next to people’s houses
-a sheep
-donkeys pulling carts
-camels (they’re bigger than they look in the movies, although I’ve never made it through Lawrence of Arabia so how should I know.)
-a snake
-deer-like creatures (possibly related to antelopes) in the vast gardens around Akbar’s tomb
-birds (including pigeons, peacocks (near the cremation sites – see the last paragraph of “Where is Eliza"), chickens, geese, and some non-descript, unidentifiable fowl)
-a pig
-lots and lots of mosquitoes
-lots and lots of fruit flies (Time flies like an arrow, but fruit flies like a banana.)
-and a dead rat Everywhere you look you see stray dogs. (See “Trip to Delhi and Agra – Part 1”) They seem to survive just fine on the trash on the street although they are all skinny, but the people are skinny too. There is basically nobody overweight in India.

I can’t speak for my sister, but I have been rather disappointed that I haven’t seen any elephants yet. My parents saw elephants in temples when they went to Bangalore and Madurai in September. One elephant would “bless” you by touching your forehead with its trunk when you gave its owner a few rupees. 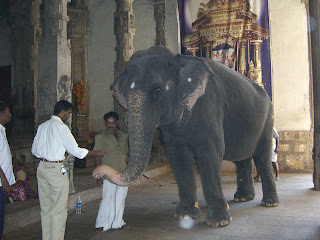 Many people here are vegetarian or part-vegetarian because the Hindus don’t eat meat or at least don’t eat beef and the Muslims don’t eat pork.
There is also a religion called Jainism where not only do you not eat meat, but you don’t eat onions or garlic, either for fear of eating small insects that live in soil and have crawled into the vegetable or for fear of killing those same small insects in the act of pulling it; I’m not sure which.

In Hinduism, there are many gods in the shape of animals. Some examples are the elephant-head god Ganesha, god of beginnings and remover of obstacles (see “Beginnings and Political News”) and the monkey-head god Hanuman, who lead an army of monkeys against the evil demon King Ravana in the famous Indian epic, Ramayana.
Posted by Eliza at 9:44 PM