Trip to Delhi and Agra – Part 1 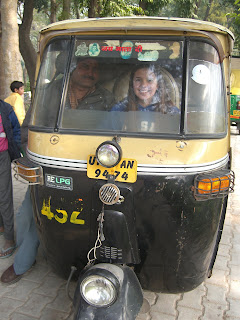 Delhi seems poorer than Bangalore. On our first day there, we walked to the metro station and noticed this. There are thousands of stray dogs and trash on every surface. You’d think that the Indian government would hire people off the streets to work making trash cans, delivering them, installing them, and enforcing that they are used. The people who are already working cleaning up this trash could have first dibs at the jobs. Then Delhi would be so much cleaner and would attract more tourists.

We only stayed in Delhi for a night before going to the train station to catch the express train to Agra at 5 in the morning. The train was delayed but a guy at the government booking office said it was canceled, probably so we would buy a much more expensive bus ticket from him. Although Eliza had her heart set on taking a train, we got on the bus. The bus didn’t seem that unpleasant to me because I didn’t feel sick like usual, but Mom disliked it. The bus made it to Agra in six hours¹ and although the bus was going to the Taj Mahal and other landmarks in Agra, we decided to go with a rickshaw driver on his “tuk tuk” to our hotel. The rickshaw is shown above with Eliza in it. This turned out to be a very good move because not only did we get to relax in Agra and take our time looking at the landmarks, but we also befriended the rickshaw driver. His name was Nati. The next day we toured Agra with Nati taking us to see the sights.