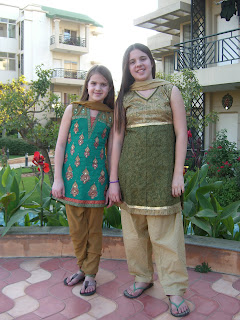 Blackouts here are really common; there have been at least seven ones since we got here three days ago. The lights will flash off randomly and pop back on just as quickly; so far we have been in a blackout in a grocery store, restaurant, our apartment, and other places that you would think would have decent electricity. The people living here practically ignore them, it just looks like someone hit pause on a remote and froze us. Then the lights come back and everyone resumes shopping, walking, talking and doing whatever they were doing before. I wonder what would happen if for just one day, there were that many blackouts in Colorado. Usually, if we had a blackout there, people would talk about it into the next day: “Did you have the blackout too?” “Ours was out for an hour!” and so on.

Our apartment building has elevators but we never really use them. We are on the 3rd floor here and sometimes after walking around all day, carrying bags and feeling car sick from the bumpy roads; you really are not excited about walking up the steep, long stairs to go to your apartment. The risk of a power outage, however, discourages us from taking the simple way up, except when carrying vast amounts of our luggage up like on the first day we were here.

I have never done as much shopping in my life as I have done in these last three days. When moving into a furnished, but unstocked, apartment you really notice how much you need in an average house. Yesterday, as well as buying books which were amazingly cheap from a bookstore in downtown Bangalore, which is about 45 minutes from where we are living, we bought some traditional Indian clothes, two salwar kamises, one for Eliza and one for me. Salwar kamises are long sleeveless (or with sleeves²) shirts over tight or baggy pants with a scarf called a dupatta that usually matches the salwar (the pants). They are less formal than a sari.

¹ The 3rd floor is really four floors up because there is also a ground floor, which is what Americans call the 1st floor.
² Some girls do not show their shoulders or legs so the salwar kamise comes with attachable sleeves that you can sew on.
Posted by Sophia at 10:23 PM