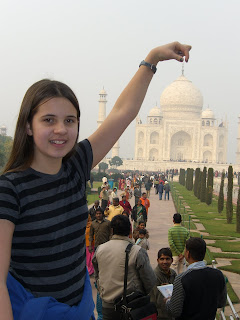 Eliza has to make up the homework from the 4 days that she missed while we were up north so she isn’t blogging these days. There is no school on Thursday due to a Tamil harvest festival holiday – Pongal. [Correction to previous post: Republic Day to commemorate India becoming a republic in 1950 (2½ years after India became independent) is January 26.] Surprise! The girls came home from school today with a note that there also won’t be school on Friday or Saturday due to the annular solar eclipse. The girls are not in the mood to go on another trip so we will hang around Bangalore. Maybe we will go to the planetarium to see the eclipse. The girls are also arranging get-togethers with school friends. Maybe Eliza will get in a blog entry this weekend.

Eliza is studying computer programming in school -- not too surprising given that we are in Bangalore, India, but not an experience many American youth get these days. In addition to the standard classes, the girls have a chess class, yoga, and civics. PE is called games. The school doesn’t have art, dance, instrumental music, or choir.

Agra was really nice. We could walk to the Taj from our hotel, and we were READY to walk after sitting so long on the bus. Sophia was disappointed that the Taj was basically empty except for the two marble caskets of the beloved wife and her husband. The monkeys lolling around the courtyard helped entertain the girls though.

The train back to Delhi was, in fact, canceled, and we ended up on a train which turned out to take 12 hours to travel the 200 kilometers. Our three tickets on the slow train cost about US $3, but I would have preferred to spend more money and less time on the train. Sophia was suffering from Delhi belly and threw up 3 times on the train.

We didn’t have much time in Delhi since Sophia wasn’t feeling great and we caught up on some sleep after the long train ride. We did see the Red Fort constructed by Shah Jahan who also had the Taj Mahal built. Every Independence Day (August 15), the prime minister raises the Indian flag at the main gate to the fort. We managed to escape the Delhi crowds and noise by visiting the cremation sites of Mahatma Gandhi, Jawaharlal Nehru, his daughter Indira Gandhi, and her sons Rajiv and Sanjay.
Posted by Celeste at 7:38 AM