We had spotty internet access over the weekend, and then it went down entirely until a technician fixed the problem on Tuesday afternoon. I was asked to confirm with his supervisor over the phone that the “good man” had indeed fixed the problem. I love the way Indians say “good man” and “good name.”

Friday was eclipse day. I found it markedly cooler during the eclipse, and the interplay of light and shadow through bushes made interesting crescent patterns. Eric was on the roof at work looking through a pinhole with the Muslims and non-superstitious Hindus. Work was noticeably quiet with many Hindus absent. Hindus consider eclipses inauspicious and tend to stay inside. Restaurants in town suffered from lack of business. Busy streets were deserted.

I played duplicate bridge last week and have plans to play again this week. The community is very welcoming but quite small considering the size of Bangalore. Many of the players started off playing chess but never looked back once they started playing bridge. Chess is a mandatory subject at the girls’ school.

I’m learning some interesting facts about Bangalore. More than half the foreigners in India live in Bangalore. I’m not sure if that statistic includes foreigners from neighboring countries such as Sri Lanka and Nepal or not. Living on the outskirts of town, I can go for days without meeting any discernable foreigners.

A related fact is that more than half the multinational corporation (MNC) talent – not sure how that is defined – is in Bangalore. This statistic is from the newspaper, I think the Times of India, which also reported that the workplace gender ratio in India is 80:20, men to women. A few years ago it was 95:5 so changes are happening rapidly. Women tend to quit the workforce once they get married and have children. MNCs are offering bonuses to search firms that help their companies hire women.

The traditional big four cities in India are Mumbai (Bombay), Delhi, Kolkata (Calcutta), and Chennai (Madras). They are all coastal cities except for the capital, Delhi. Bangalore is one of Asia’s fastest growing cities and will pass Chennai’s population soon if it hasn’t already. The issues in the upcoming municipal elections bring home that point. Residents want access to clean water, regular trash pick-up and safe, well-maintained roads (as well as an end to corruption). A metro is being constructed downtown, but basic infrastructure seems to be a more pressing concern.
In addition to being India’s Silicon Valley, Bangalore is known as the Garden City. Think nice weather, in particular a small temperature range throughout the year. A bridge player compared Bangalore to Florida, noting that Florida is well-known for its retirees who appreciate the mild climate. And, yes, there are lots of palm trees here. There are also coconuts for sale every fifty meters or so along the sides of roads. First, you drink the coconut milk through a straw, and then you eat the meat inside. 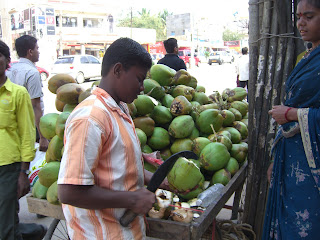